If you like to write fanfiction, drop by the Fanfiction Section of the forums!

If you have any Alien 9 / Alien Nine related fiction that you've created to share then let me know through the Contact page, thank you!

Members of the forum have posted a few fanfictions including an extensive roleplay spanning over 900 posts. Check them out and join in!

He was not human and, as one would expect, neither was she. She was a creature from another world, whilst he was born and raised on Earth.

I'm Not Me Anymore

Yuri was terrified as always [...]. One of her pigtails had come undone, and her shirt had been torn. A strange (they all were,) bug-eyed alien, was barreling after her...

The following fiction is in Spanish. You can use Google Translate to help read it. 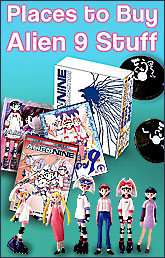