Back to the Staff Features page

If you're interested in buying the soundtracks, DVDs, books or anything else then you can find some places to purchase them in the Store section.

The talented person responsible for the music of the Alien 9 (Alien Nine) anime is Kuniaki Haishima. Although he may possibly be a more obscure composer than other artists, the work you may of heard from him will probably stand out. He likes to experiment with styles and I personally feel that this ability to be experimental really suited the atmosphere of Alien 9 (which in itself was rather abstract). The music was composed during 2001. 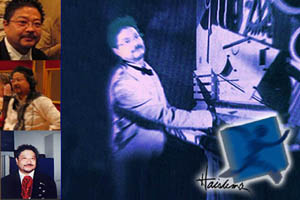 Haishima studied at music school and after leaving, did work for both computer games and animation before joining a company called Shade in 1999. Although he isn't sure what first made him become a composer, he enjoys making music as it allows him to be creative and feel like I can go to a different world. Haishima primarily composes his music in the office as it keeps him working harder due to the "moderate tension". He often composes music for keyboards, as he can not play guitar he likes to work with guitarists. As well as background music he composes atmospheric sounds and sound effects and feels that this also is an important aspect of sound. His procedure often involves viewing imagery from the series/game he is composing for so as to be inspired by the visuals and imagine a musical atmosphere to match by playing around with various styles, he then moves on to keyboard where he composes the melodies before inputting everything onto the computer for final work.

RocketBaby did an excellent interview with Kuniaki Haishima about how he creates his music and his inspirations which gave me a better insight into the background behind him and this soundtrack. RocketBaby's website: RocketBaby.net.

My opinion of the soundtrack

This review refers to particular tracks, visit the Tracklisting page for a list of tracks.

Just like the series itself, the music seems to use a lot of contrast to create an unusual atmosphere. Combining playful high-pitch notes with low resonating sounds or beats certainly provides unusual but appropriate results. Often simple instruments chime in, such as triangles or basic notes on a xylophone or flute, that have a childlike quality them. Which is of course very approriate to the characters within the anime, which are themselves children. But they are contrasted with deep and ominous beats and resonating chords which give an impression of underlying threat and fear.

Even with the tracks that obviously are moving towards a more threatening tone, unusual sounds and simple high-pitched instruments chirp in every now and again. Perhaps to represent an element of confusion. This element of confusion also can be heard when chords are played slightly out of key or warped to sound a little absurd.

The more playful and lighter tracks, are rather magical as chords and notes mingle with each other as if dancing on air. Whilst other, more unusual sounds, chime in every now and again. This sort of adds a surreal quality to them in some respects.

And then there are Tracks like number 10 which are really very mellow and paced out. Rather relaxing even and pleasant to listen to, which is a great contrast to some of the more anxious tracks, but with certain warping notes and beats playing throughout quietly there is still an element of consitency in terms of pointing towards providing an unusual edge.

Throughout the soundtrack, there is a real variety of sounds and the atmosphere conveyed along the way changes often. Some sound very wistful and carefree whilst others are very pesistent in their beats (Track 8 is full of beats which make it sound rather industrial or digital).

And of course there is the great contrast between the opening theme and the ending theme. The opening theme is very upbeat with higher notes. This I feel is rather appropriate as anyone who first watches the series will hear this playful music and be led to believe that the series is completely bright. Just like when someone first views the art and animation, they would be led to believe that the series is a light-weight comedy. But of course by the time they see the ending to the series, where in stark contrast, the music has a more slow pace and lower beats, they will of already realised that there is a more dark element to the show. The ending music is also therefore very appropriate.

Someones going to call me crazy but some tracks like Track 20 makes me think of music from The Planets (a soundtrack of which the details escape me right now). Due to the slow and soft mysterious pace to it, with low pitch vibrations rolling in every now and again and more high-pitch notes making an appearance at selected times. It really creates its own strange atmosphere. And a lot of the music from The Planets has this soft mysterious edge to it, since the planets in space are empty, quiet and mysterious.

Overall I think Haishima did very well at creating and matching a musical atmosphere to the feel and imagery of the show.