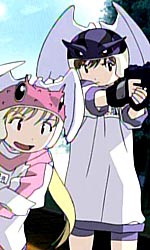 Evangelion was fun to watch, and I kinda feel bad comparing Alien 9 to Evangelion because well...I don't know. But I have a lot more empathy for Kumi, Kasumi, and Yuri because they seem like they can be any one of us. We've all felt fear, loneliness, the lost of something or someone...Asuka had my sympathy, sure. But she just I don't know...seemed to super!German!Collegegrad!Character! I don't know how to explain it. The more I think about it, Yuri isn't really a female shinji. The things they have in common are they are both forced into a situation they didn't want to be in, and that's about it. Yeah, I guess you can say they both whine a lot, but Yuri whines because shes a 6th grader who has to wear an alien on her head, and fight aliens, and get licked by aliens...and the kid is like, only 11. At that age, I'd crawl into a hole and die if I had to do that.

The whole jist of Alien 9.. I guess it's adolescence, in a symbolic way. But non-metaphorically, it is about... ahem... 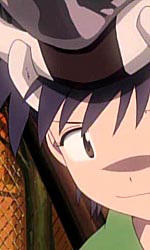 Aliens invaded earth in 2002, around the time that Kumi, Kasumi, and Yuri were born. They invaded with the purpose of owning the people of Earth, because Earth has the most hearty electric waves. Some alien clans are more agressive than others, but they all share this same goal. To make everybody an alien, and for Earth to become an alien planet.

In order to fuse with the hosts properly, the alien and s/he must have a certain amount of time together to become in sync with each other, mentally and physically. Sure, it would be a lot quicker if they just fused with the hosts right then and there, but as proven in the case with the Sunflower clan, the human body wouldn't be able to take it and would become unfunctional. (Thats why in volume 3, the kids vomited and passed out after wearing the sunflower aliens on their head. The 3 boys that wore the gladius aliens on their head in voulume 1 had some previous experiences with aliens, thats why they were able to keep them on for longer.)

So the drill clan, which is I suppose is the kindest clan prefers to live symbiotically with the host for a while until the host is ready to fuse with the alien. Ms. Hisakawa, head of alien party at Elementary school 9 is part of the drill clan. She has fused succesfully with her alien, which sits atop her head as hair.

3 kids are chosen to become party of the drill clan (alien party) and from the day they are voted in/join they will be put into many situations in which they will learn to fight and live with their aliens. The aliens that the girls fought, not including Yellow Knife and the Lynax, were ordered by Ms. Hisakawa for them to fight. Kind of like, when in an RPG, if you have a weapon you use most often you'll become more skillful in the field of that weapon by earning experience points with it.

While not all the people of Earth will become part of the Drill clan, everyone will eventually be forced to live with an Alien, if the invasions keep up. Of course, they can always have the drill clan to protect them.