Looking for information on the anime DVDs? Click here. 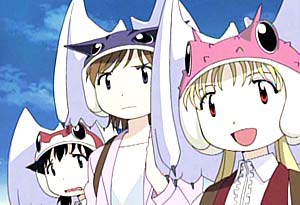 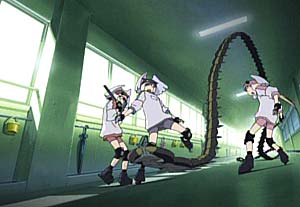 Type:
OVA (short, straight to video release)
Total Episodes:
4
First Released:
2001
Official Websites:
Central Park Media's Alien 9 Section
J.C. Staff's Alien 9 Section
General Running Time:
28-30 minutes
Description:
The anime series is quite a faithful adaptation of the manga books, although it does leave out a fair bit from the earlier sections which is to be expected. The more 'fun' parts of the manga were expanded upon for the animated series. As a result the section where the main characters go on holiday has more detail in their activities which is mostly summed up by 4 illustrations in the book. Overall the anime does a fantastic job of translating the manga to screen. The production and music was extremely fitting. The anime is a must to see but unfortunately it does not cover the whole of the story for Alien Nine. The 4 episodes only cover the first book of the manga and just under half of the second book, this has the unfortunate effect of ending the series with a cliffhanger. As far as I can remember there was a hint at continuing the series at first, however for some unknown reason these plans seemed to of died, I can not say how well the series did in Japan. But checking out the anime first is a good precursor to the enjoyable books.

In Japan various promotions were done for the anime series, mainly featuring the three voice actors cosplaying as the main characters they voiced. They attended special Alien 9 panels and events, signing autographs and even putting on a dance in full Alien Party gear! They also did various interviews regarding different aspects of the show, including the music in promotion of the CD releases. 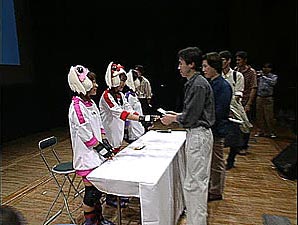 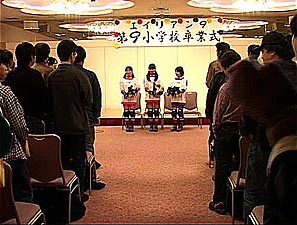 The trio attend a special Alien 9 event to celebrate finishing production of the anime. 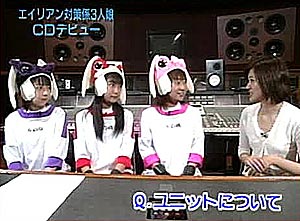 The three voice actors attend an interview in promotion of the music CD releases.

The following images are from the old official Japanese site before it died. 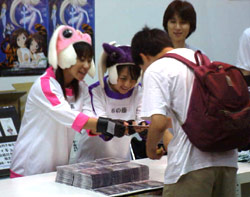 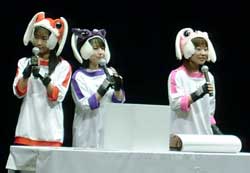 Click on a thumbnail image below to view the full image. Images from the Alien Nine Bonus DVD. If you're interested in seeing the show the Japanese bonus DVD contains a music video featuring the dance. The Store section has tips on purchasing it.

The girls actually performed this live stage show where they cosplayed as each of the main characters that they voiced and danced to the theme music "Flower Psychedelic"!

Kumi you're such a poser :)