Kumi joined the alien party becuase she was sick of taking care of everyone else and wanted to sherk her duties. 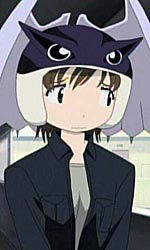 The responsibility that is always put on Kumi is unfathomable for a person her age. The whole irony of her case though is, in the end everyone becomes her responsibilty--and Yuri depends on her like we depend on gravity.

Kumi becomes an alien. She didn't just fuse--she became one. When she was killed, Hisakawa just threw her into some cell gell and well, waited for her to recover. But Kumi's bond with Yuri let Kumi sense that Yuri was in trouble. (When isn't Yuri in trouble? ^^"") And so, since she couldn't just lie around all corpsy like and wait to save Yuri, she became one with her Borg so that she would recover quicker. Kumi and her Borg had enough time together where they were able to do this. Her head is the only human part of her. That sucks.

This also one reason why instead of borg drills from her hair, she has to generate them from her body parts. Another reason is her hair is short. Which also has to suck. Kumi feels no pain, but now since she is a borg, she also feels the need to protect someone. Thats why she was with Kasumi for so often--she didn't want to harm Yuri with her um alien ways so she went to Kasumi instead. Drama :D And of course, Kasumi is always ready for affection and didn't refuse Kumi or anything. More on that later.

I hate Emulators. For the most part its because of how much it destroys Kumi. They make her seem like a fucking psycho borg. She still has a human conscience and wouldn't want to fuse with Yuri forcedly like the manga was trying to make it seem. Stabs Emulators.

Even though Kumi is an alien, she still is Kumi. Good ol' selfless Kumi.

Welcome to the Alien Party, Kumi. Make the best of it.